The narrator’s voice is familiar, if a bit thin, because the man, Woody Allen, is now 80. Cafe Society is his forty-seventh feature film, and as usual with this director, it recapitulates settings and themes of his earlier works. But as with the aging voice of the narrator, echoes of more vigorous days are faint.

The setting for the film is Hollywood of the 1930s, which gave production designer Santo Loquasto an opportunity to re-create glamorous movie-star mansions, clubs and restaurants, and famed cinematographer Vittorio Storaro a chance to set it all aglow in golden, nostalgic light. A soundtrack of ’30s standards (Count Basie, Benny Goodman, Richard Rodgers,  Johnny Mercer) identifies this as a Woody Allen film as reliably as the Windsor Light Condensed font of the titles.

Jesse Eisenberg is Woody’s surrogate in this film, channeling, as have many actors before him, the New Yorkish mannerisms of the young Woody. He plays Bobby Dorfman, the naïve young man who wants to escape his stifling life in the Bronx by seeking a job with his uncle, Phil Stern (Steve Carell), a big Hollywood agent. Bobby’s parents want him to work in his father’s jewelry business, an unacceptable option for a young man with dreams, however inchoate.

Bobby arrives in Hollywood, where Uncle Phil puts him off for weeks while he stays holed up in a cheap motel. Eventually Uncle Phil, in between parties, phone calls from Ginger Rogers and dealmaking for Paul Muni, Gloria Swanson, Spencer Tracy and Hedy Lamarr, takes his nephew under his wing, giving him an errand-boy job and bringing him into his privileged circle.

Bobby quickly grows disenchanted with Hollywood, complaining with a cynicism beyond his years, “This whole town runs on ego.” After an awkward, Holden Caulfield-like encounter with a call girl, Bobby sets his sights on Uncle Phil’s secretary, Vonny, who befriends him but warns that she has a boyfriend, a traveling journalist who’s seldom around.

Bobby sees in Vonny not only a beautiful girl but a kindred spirit: she’s down-to-earth and unimpressed by Tinseltown glamour. What he doesn’t know is that Vonny is Uncle Phil’s mistress, for whom Phil is considering leaving his loyal wife, Karen (Sheryl Lee). It’s a classic Woody Allen older man-younger woman scenario. Interestingly, Phil (who was originally supposed to be played by Bruce Willis) is not the sleazy show-biz player we expect but a sincere fellow tortured by his love for a 25-year-old woman. While Phil doesn’t say the words “The heart wants what it wants,” Woody Allen’s statement about the unconventional genesis of his relationship with wife Soon-Yi, what he says is pretty close.

Kristen Stewart, as Vonny, is not the dazzling beauty described in the script. Her permanent sneer and vocal-fry diction are jarring in the period setting. Eisenberg is able to mimic the posture and demeanor of a 1930s swain, but not so Stewart. Even some of Vonny’s lines sound ported from the future (did people in that era really say that a boyfriend “dumped” them?). These are rare lapses for a Woody Allen movie. 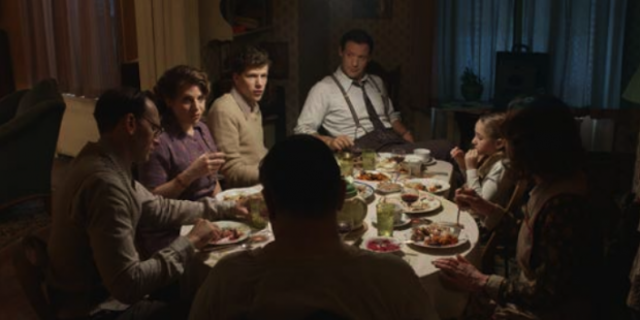 It’s more fun watching Bobby’s Bronx family, a bickering clan whose cramped quarters evoke the texture of Radio Days. Jeannie Berlin, a fantastic actress too seldom seen, is Rose, Bobby’s worried mom, who complains about her husband, Marty (Scottish actor Ken Stott), “You don’t have a Jewish head; you’re stupid!” Their eldest son, Ben (Corey Stoll), is a gangster, and some of the funniest scenes involve his cohorts’ dispatching of various hapless enemies.

Like Woody, Bobby prefers Manhattan to L.A. He returns to New York and goes into the nightclub business with brother Ben. The smart set flock to the club, attracted by its glamour and dangerous Mob cachet. Bobby, now a bigwig, crosses paths again, wistfully, with Vonny.

The side business — the Dorfmans bickering about religion and ethics, Ben and his crew hiding bodies, Evelyn’s mean neighbor — is considerably zestier than the young-man-goes-to-Hollywood story and romantic triangle. Maybe stories about ethnic origins, rather than aspirations — Jacob Gatz before he became Jay Gatsby — are just funnier. Grade: B-